I don’t know what day of the week it is, I only know that it is the morning of day 21 of the invasion of Ukraine. As I sit, drinking my coffee and following the news, I find myself sad about the friends we’ve lost, worried about the safety of our family still in Ukraine, and proud of the incredible unity and fighting spirit of the Ukrainian people. I’m even a little optimistic – because the map of Ukraine has looked roughly the same for at least a week, and there are signs everywhere that the Russian army is out of ideas. I don’t consider shelling apartment complexes, schools, and hospitals an idea.

Three weeks ago, we were living our best life in Ukraine, coaching golfers, getting our games together, and loving our beautiful city of Kyiv. On Feb 24, early in the morning, we were jolted from our sleep by Russian missile strikes and drove west, eventually finding our way to the Polish border. It was nervewracking to say the least, as we half expected to see Russian tanks and troops around every curve. Shortly after our arrival, we learned that our beautiful golf course – Golfstream Kyiv Golf Club – was destroyed in a battle between Ukrainian forces and Russian paratroopers. What happened to our staff of greenskeepers and clubhouse workers is still unknown.

What are we doing at PGA of Ukraine today? Well, most of our golf coaches have joined the Territorial Defence forces, and are at their posts defending their land. Our office in Kyiv is working, doing all they can to support the families of our members in harm’s way. They need money, food, diapers, medicine, transportation, security, and what any other family needs when one of their breadwinners is away serving the country.

Anna is splitting her time between several different humanitarian efforts. She gives out food at the Polish border, prepares beds in refugee shelters, and helps to gather humanitarian aid to be sent to Ukraine.

I’m in constant contact with people in the golf world, trying to raise awareness, funds and get our message out. I also visit my friend Chris in the hospital quite often. He escaped from the battle of Irpen – one of the bloodiest scenes of the war so far where several prominent journalists were killed. We worked together with Chris’s family, a private security team, and our network inside Ukraine to get him to Poland. We met him here and took him straight to the emergency room. He’s been in the hospital ever since and we hope he will make a full recovery. His story needs its own article, and I promise to tell it soon.

I’d like to take a moment to thank the Polish people for opening their hearts to us. We are staying with a lovely couple who have generously given us a room in their apartment. They ask for no money and honestly, they are overfeeding us. Poland is now overflowing with Ukrainian women and children, every home has refugees staying in it, and new shelters are going up everywhere.

So, I will close by saying that we will continue our efforts to help refugees, and support our organization inside Ukraine. We can help people get out of dangerous areas. We can get them food, medicine, and basic necessities. But we need your help. Please consider donating to the following link:

Thanks for your support
~Jeff and Anna

It’s important to realize that in golf there are two swings – a power swing for big shots and another swing for performance inside thirty yards.  This swing technique we will call a finesse wedge.  With a finesse wedge we create a high soft shot with more backspin that stops quickly on the green. A finesse wedge is not only different from your full swing, but it is almost exactly opposite when it comes to sequencing. So it’s critical to practice them both.  Let’s get into the fundamentals of the finesse wedge.

Start with the setup. The feet should be close together, with the front toe facing slightly out and left of the target. This allows us to stay balanced as we turn toward the target and release the club.  Next we need to establish the low point of the swing in front of the ball. This is done by slightly rotating the chest toward the target in setup.

Take a very light grip with the trail hand slightly on top of the club and a soft fold in the elbows and the left wrist slightly cupped.  There should be just enough hip hinge for the arms to dangle straight down from the shoulders. Lastly, we want to stack the shoulders and hips so there is no lateral bend  away from the target like there would be in a power swing.

Keep the body rotation minimal, the backswing is done softly and mostly arms and hands. Do not take the club inside the target line, keep it on plane with the toe up.   In the power swing, the lower body and especially the hips are responsible for generating power. In the finesse wedge shot, their job is to create stability.

The downswing should be tension free as you let gravity pull the club down to impact position.  The shaft of the club should be close to vertical at impact as we do not want the forward shaft lean of the power swing.  The release will happen naturally if you relax and rotate your chest toward the target.  Your finish position will have your elbows slightly bent and the club in front of the chest.  The club face should point straight up to the sky.

The sequencing of the finesse wedge is the exact opposite of the power swing.  With the power swing, the hips initiate the downswing and the shoulders, arms, hands and club head follow.  This sequence will not help your chipping. During the downswing of the finesse wedge, the  the club head moves first and everything else follows in reverse order, with the hips last to join in.

As you finish the shot, your momentum will pull your head and body slightly toward the target. Let it happen, and do not try to keep your head still after impact.  Allowing your head to flow toward the target helps to ensure that the low point of your swing is in front of the ball.

1. Setup with feet close together and slightly open to the target

2. Backswing on plane with toe up

3. Release the club with soft elbows and club face pointing to the sky

4. Use optimal sequence for finesse

5.  Gently allow your energy to flow to the pin

Or just watch Anna on the video and do what she does!

We spent Easter weekend at the dache (country house) outside of Kyiv. It was a great time with family – BBQ, egg decorating, the good stuff. But this year, there was an added twist. We brought a sand wedge and some soft practice golf balls. This changed everything, and may even be the beginning of a family tradition.

Golf is thought by many to be a rich man’s game, and that’s fine, a lot of successful people play, and it can be pricey to get out on the course, fair enough. But golf doesn’t have to be expensive.  Old Tom Morris, the caretaker of St Andrews and father of modern golf, was very against the idea of golf being only for those who fly first class. Like me, he found the very idea vulgar and bourgeois.

One of the goals of the Kyiv Golf Academy is to grow the game of golf in Ukraine, and to do that, the game must be available to working people, middle class families, students and ordinary people in general.  That’s why this idea is so important to us. Golf is for everyone!

So, how do you do it? How do you play without a lot of cash? Well, this weekend, we put a flag in the ground on a piece of grass, took our one golf club and held a closest to the flag tournament. Young Dania, my nine year old nephew, was the star of the event. He had never hit a golf ball before, but after watching me hit some high arching shots, he wanted to try.

It’s very important when introducing kids to golf that you don’t over coach them. I just showed him a basic grip and let him work it out for himself. It was fascinating to watch.  He started hitting them high in the air, but without accuracy.  Didn’t matter, he loved watching his shots sail.  After he had hit a few, we started hitting alternating shots. He watched me like a hawk, and was soon imitating my pre shot routine.

Once we turned it into a contest, he was hooked. We played played for hours, and it wasn’t long before he was putting shots less than five feet from the flag. I watched has he began to develop the touch necessary to control the distance of his shots.  Then he announced it was time for a tournament.

Anna and I were first to play. I had three orange practice balls and she had three pink ones. After six alternating shots, we measured our best. Anna beat me by a full foot. Then it was time for her and Dania. It was close, but Anna was the tournament champion.

Dania and I renewed our alternate shot contest until the sun went down. In all about five hours of golf. He made a lot of progress, and never once picked up his mobile phone. For Anna and I, it was a great opportunity to practice our wedge games, to introduce the game to a newbie, and to enjoy some real family time. After that, the BBQ tasted better, the whiskey smoother and we slept like bears.

Here’s a little video for you golfers out there on a rainy day in Kyiv. It’s Ben Hogan’s impact drill. You can use a golf club, a broom or any kind of stick, and you can do it anywhere. Anna breaks down the move in Ukrainian language for the locals.

Be the ball, Danny

Anya on the tee at Eagle Crest 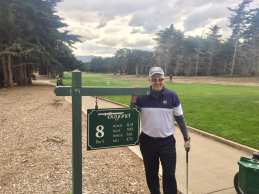 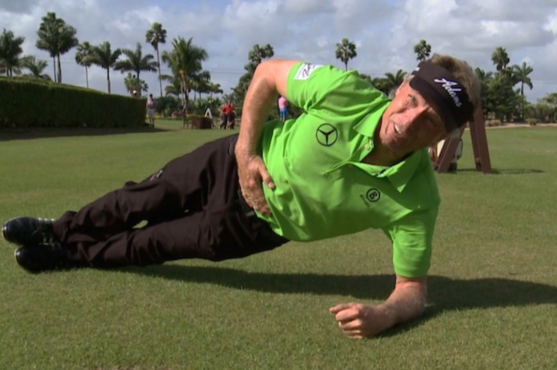 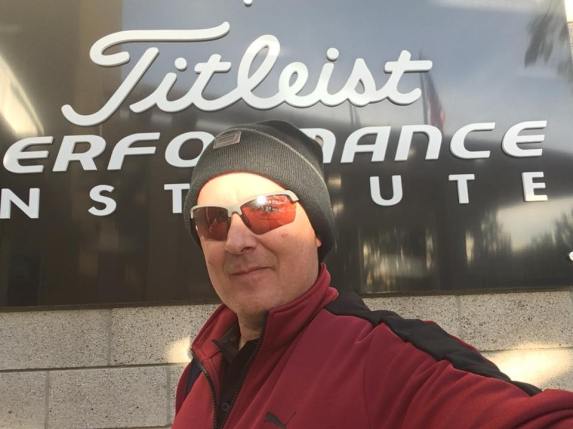